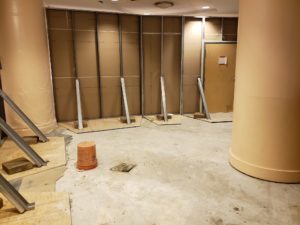 Construction crews began removing tile last night after the library closed.  They were able to get more done than they had anticipated, which is great news for the timeline of our project.  However, each section of tile may be a little different, so it doesn’t necessarily mean that all of the tile will come up as quickly.

Tonight they will remove the tile along the hallway north into the building.  They hope to be able to remove all of the tile down this hallway to the reference room, including the atrium.  Maintenance has removed the fabricated tree and books in front of the Kids Library in anticipation of the work that needs to be done in the atrium.  The tree has been temporarily relocated to the reference room until it can be moved back once the new tile is installed.

Assuming everything goes well tonight, on Wednesday night they plan to remove the tile in the circulation lobby.  Digital Services will move a couple of the self-check kiosks in the evening and then the others after the library is closed.  Customers will still be able to use at least two kiosks in lobby until we close, plus they will still have access to the other kiosks in rest of the building.  Once the tile has been removed, Digital Services will put the kiosks back in the circulation lobby before we open. 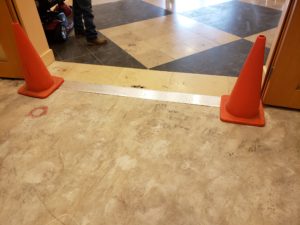 After all of the work in the circulation lobby and hallway is complete, they will move into the rotunda area.  We will have more specific plans and a timeline for that section of the project in the next few days.

Once Tile is Removed

Once the tile is all removed there will be sections of the concrete sub floor that will probably need to be leveled, cleaned, and repaired.  This will be the next step in the process before the new terrazzo tile can be installed.  The terrazzo tile is expected to arrive on January 20th, so that will be the earliest that we will be able to start laying the new flooring.  Of course that depends on whether or not the floor is ready for the new tile.  We will keep you updated as we get more information.

Thanks to everyone for helping to make this project a success.  Everyone has had to work around the construction to some extent and I’m sure answer questions from customers.  Thanks to Maintenance and Digital Services for all of the work in preparing the areas and moving equipment.  A big thanks also to Circulation who has had to deal with moving their desk and have handled a large number of the questions about the construction.   Thanks!