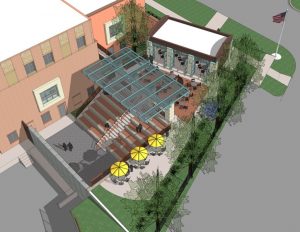 The weather has been kind over the last couple of weeks and has made it possible for the concrete crews to make a great deal of progress.  Over the next two weeks the main focus will be on the creation of the bridge that will lead from the building to the courtyard patio.

Customers will enter the courtyard through a doorway near the cafe at the end of the front hall where the payphones had previously been located.  They will then walk along a bridge to the patio and the rest of the Claire’s Courtyard.

The first step in creating the bridge will be removing some of the bricks on the outside of the building where the new doorway will be located.  Construction crews are scheduled to do this on Friday, October 26.  A portion of this work might be fairly loud.  However, they are planning to have that work completed by 9:00 am.  There will still be some work in that area later on in the day which might cause some noise, but it’s not supposed to be as bad.

This work will occur on the outside of the building where the new door will be located, so the areas that might notice the most noise are probably the cafe, Marvin 101C, the west stairway, and surrounding areas.  We apologize for the inconvenience but the construction crews will try and get the worst of it done as early as possible.