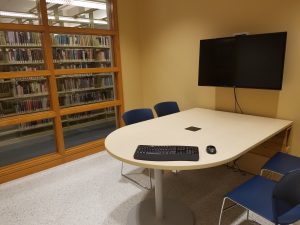 The new Team Rooms will be open and available to the public starting Monday, November 13.  Customers will be able to reserve rooms up to seven days in advance, however the reservation system will go live on Monday, November 13, so customers will have to wait until then to start reserving rooms.  If rooms are available to use customers may reserve them directly from the iPads mounted on the outside of the rooms and use the room immediately.  We will begin training staff on how to use the reservation system and the computer equipment on Wednesday, November 8.

Demolition of the building at 1001 Garfield (the old Marian Clinic) should be complete in 2-3 weeks.  There was a delay due to a power line that had to be moved by Westar before demolition could continue.  That power line has now been moved and we should start to see progress once again with the demolition.  Once demolition is complete the area will be filled in and leveled out, but will initially only be dirt.  We are in the middle of getting official approval from the city to convert the property into a parking lot.  We hope to complete the approval process in January 2018.  We will go out for bid around that time and should see asphalt, landscaping, and lighting added in Spring 2018.

The old periodicals shelving is currently in the process of getting converted in preparation of the periodicals move to the North Reading Room.  This shelving is tentatively scheduled to be completed and installed on Friday, November 17.  Once it is installed we will shift the periodicals into the North Reading Room.  One note about the shelving; when it is installed it will have a temporary top that will be plain wood.  The construction crew will add a quartz counter top approximately two weeks after the initial installation.  Eventually the old Periodicals room will become the new Learning Lab, but during the interim period it will continue to have tables that customers can use to study or for group work.