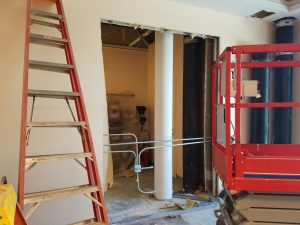 Work on the cafe pass-through continues to move along as planned.  They are currently in the process of moving the roof drains and some of the electrical in the wall (as seen in the picture).  Within the next few days they will begin work on the area where the soda dispenser is located in the public area of the cafe.

Before work on the public portion of the cafe begins they will relocate the coffee carafes, ice tea dispenser, and ice machine to the smaller alcove where the sugar and creamer are currently located.  They will also place a plastic tarp over the work area.  During this time we will have to relocate the two tables closest to the drink dispenser.  These tables will go outside of the cafe, across the hall from the other tables in the hallway.

During the time construction is underway in the public area there will not be access to the soda fountain.  The cafe will have a larger inventory of cans of pop for sale, as well the rest of their current drink options.  Work in this area will take approximately four weeks.  Once the work is complete a new soda dispenser will be available for customers.

In the collaborative workspaces they are finishing up the work in the ceiling, including the installation of the fire alarms.  Later this week glass will be delivered and installed, as well as trim work on the exterior of the rooms.  Furniture for the rooms has been ordered and computers and equipment have been ordered and arrived.