On December 6, 2016, I attended the Celebration for the completion of the Freedmen’s Bureau Project at the National Museum of African American History and Culture (NMAAHC) in Washington, D.C. The Celebration was recorded and available at DiscoverFreedmen.org.

The Afro-American Historical and Genealogical Society, Inc. (AAHGS), being one of the key partners in the entire project made a significant impact to the Freedmen’s Bureau Project by completing 223,052 batches, indexing and arbitrating 557,630 names and as a result, these records along with the names of over 1 million men, women and children are now searchable online allowing individuals to build their family trees and connect with their heritage through FamilySearch.org. 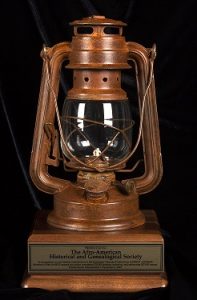 As the AAHGS National President, I was honored to accept an award of this lantern. It was for AAHGS’ tireless efforts and participation in this ground breaking history making event, which helped to bring thousands of records to light. The lantern symbolizes the Underground Railroad and pointed slaves to freedom and now it represents pointing African Americans to finding their families during the time following emancipation.

Emancipation freed nearly 4 million slaves. The Freedmen’s Bureau was established to help transition them from slavery to citizenship, providing food, housing, education, and medical care. And for the first time in U.S. history, the names of those individuals were systematically recorded and preserved for future generations.

During the Celebration, Lonnie G. Bunch III, the Founding Director of the Smithsonian’s National Museum of African American History and Culture (NMAAHC) shared a personal story of his paternal grandparents, who died two weeks apart just before he turned 5 years old. His only limited memory of his grandmother was her taking out cookie tins to make crescent and star cookies. On his own quest to search for his family in the records, Lonnie found one of his earliest known relatives in a labor contract which detailed on one side how much was paid to clean the house and pick cotton. On the other side were details of what she spent, which were on cotton seeds, borrowing a horse, and 22 cents for a set of cookie tins. This gave Lonnie a poignant memory of why those cookie tins were important to his grandmother. Demonstrating in a personal way how the Freedmen’s Bureau Records project can impact the lives of individuals.

After attending the event, State Representative Chris Stewart (R-Utah), gave a speech congratulating participants and the completion of the Freedmen’s Bureau Records Project on the House Floor. View here https://www.youtube.com/watch?v=Qtd8-4JDG48.

This project has enabled families to discover and connect to their ancestors, which before found it very difficult.