Dr. Sam Crumbine was the secretary of the Kansas State Board of Health from 1904 to about 1924. He was an early adopter of Germ Theory, the idea that tiny organisms were the cause of many diseases. At the time, it was a very controversial theory. Doctors and researchers found organisms responsible for diseases like influenza, cholera, diptheria, measles, mumps, chicken pox and smallpox. Some of these diseases are regarded as “childhood diseases” today, but 100 years ago, thousands of children and adults died from these diseases every year.

Crumbine applied germ theory to the diseases affecting Kansas communities. He realized that germs could be transmitted by common surfaces (does this sound 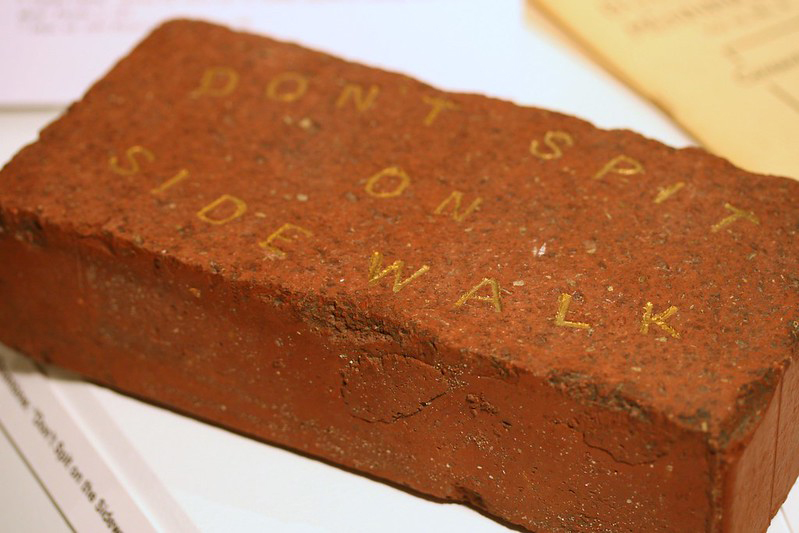 familiar?) Trying to change human behavior proved difficult, then as now. In the era before indoor plumbing was common, handwashing was sometimes tricky. Hand sanitizer did not yet exist.

Spitting was common, especially in the age when chewing tobacco was more popular than today. Crumbine knew that germs were in saliva, and had cities build in reminder bricks to discourage spitting on sidewalks. The library has one of these in our collection.

Crumbine pushed to outlaw things that were likely to be germ vectors. At train stations, for instance, it was common to have a pail or water, or a well, with a shared drinking cup. Bathrooms often had a long cloth towel that rolled into a holder, and people pulled out a section to dry their hands. People shared a common comb in bathrooms and train stations, which could transmit lice. Crumbine observed that flies would land in outhouses, then fly to tables where food was being served, carrying germs. He commissioned a schoolteacher from Topeka to design something to kill flies. A small piece of screen with a long handle served the purpose. The flyswatter was invented in Topeka! (We’re very proud.) Crumbine also offered a “bounty” for children who brought in the bodies of dead flies.

When the United States entered World War I, Fort Riley was a major hub for soldiers on their way to Europe. Crumbine saw an increase in sexually transmitted diseases around the base, and asked his nurses to help educate women and prostitutes in the area about how to recognize avoid them. This proved to be incendiary; many people did not like Crumbine’s work to protect people who were engaging in what they regarded as sinful activities.

In 1918, a shipment of pigs arrived at Fort Riley. Some of the pigs were sick, and started dying. Soon, people started getting sick. Ironically, after a career of health observation and action, Crumbine did not realize the severity of this new influenza strain. Soldiers deploying to Europe carried the virus, and the first large-scale infection incident that hit the news was in Spain. This influenza strain became known as the Spanish Flu. It was not traced back to Fort Riley until decades later.
Sam Crumbine’s legacy of public health is recognized with the Sam Crumbine Medal. This award is presented to people in health care who have made major contributions to public health. The library is honored to hold three of these in our collection. One was presented to Dr. Karl Menninger, one to Dr. Will Menninger, and one to Robert Harder, who served as Kansas Secretary of State abd was a member of the Library Board of Trustees. 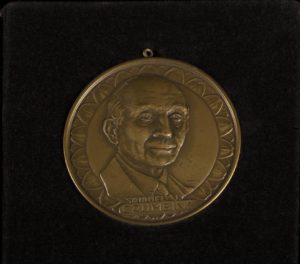 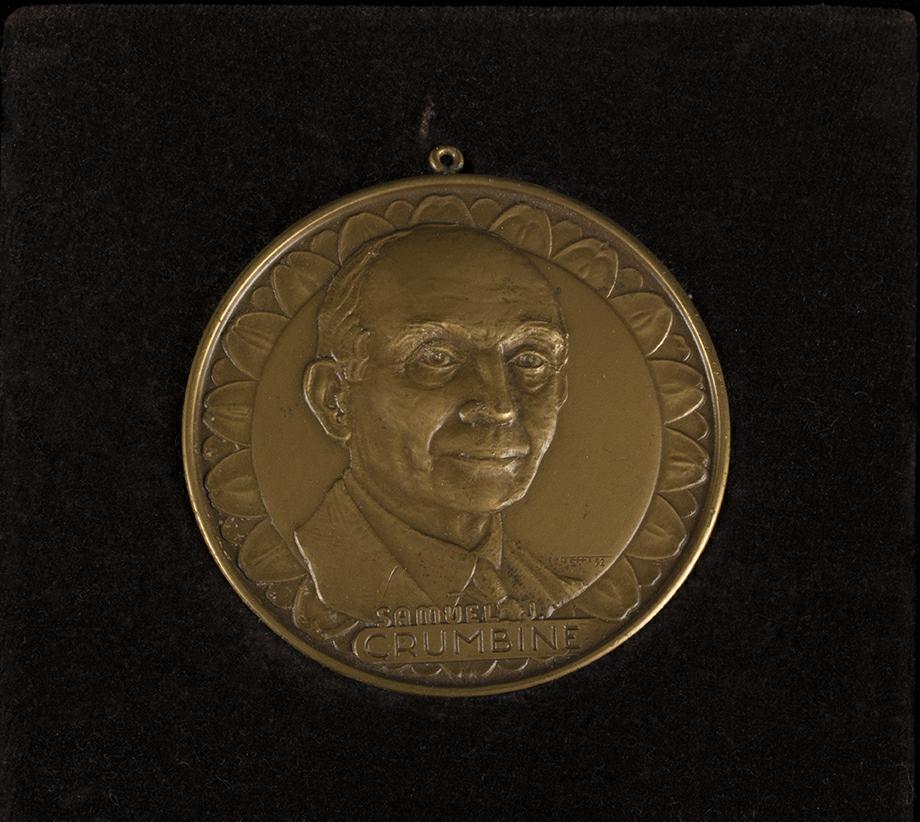 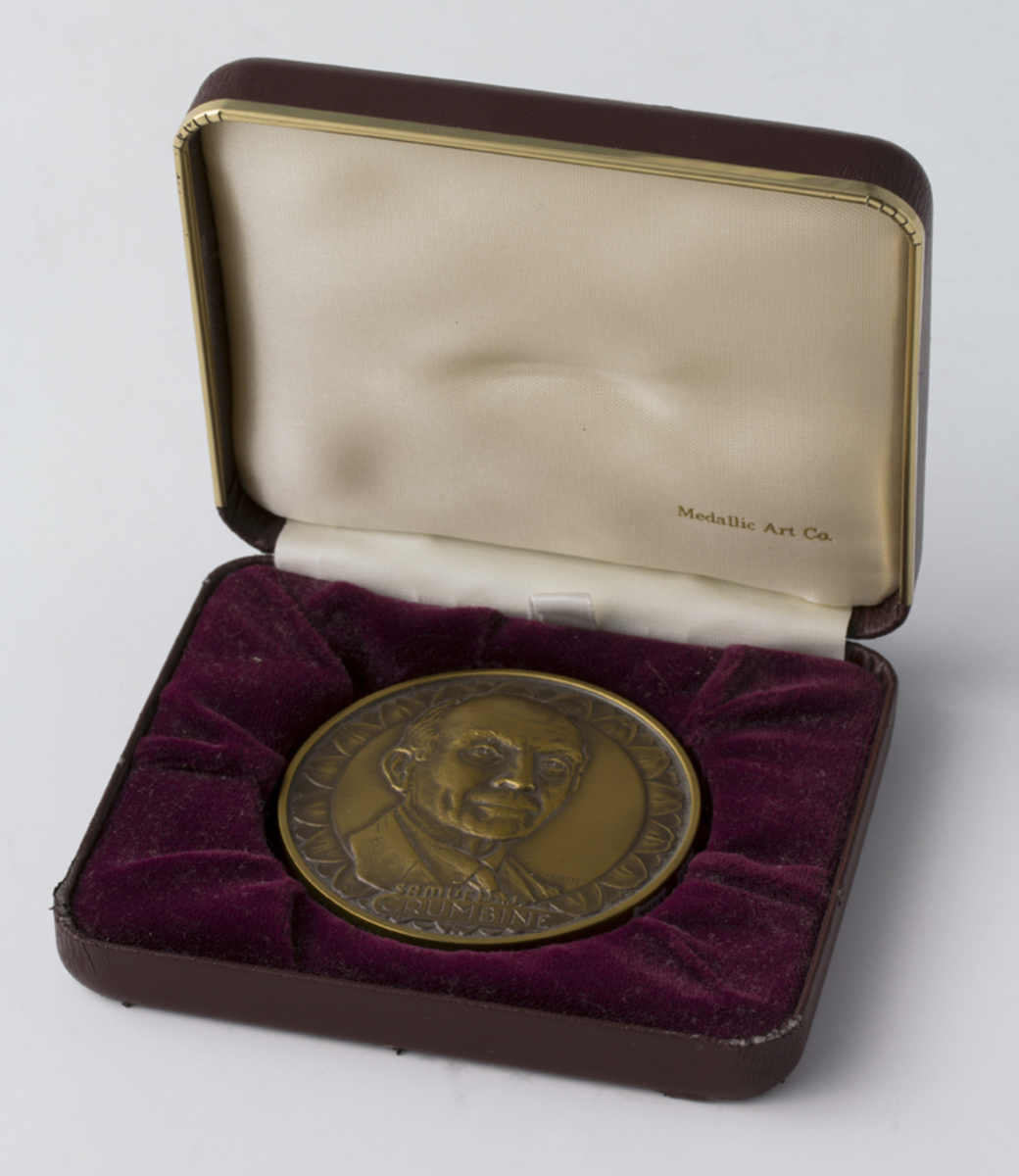 6 thoughts on “Don’t Spit on the Sidewalk, and Use Your Flyswatter.”