Posted by Scarlett Fisher-Herreman on October 17, 2017

Today is the day that the wood cases in the Periodicals Room are removed so they can be transformed into new cases to be installed in the North Reading Room. All of the magazines + the Topeka Capital Journal and KC Star newspapers have been temporarily relocated to the SE corner of the former reference room. Here’s a photo of their new, temporary spot: 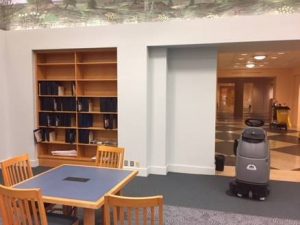 I created some simple arrow signs directing people from the closed doors of the Periodicals Room to their temporary location. Please assist anyone with questions or confusion. Hopefully, we’ll have the room put back together by the afternoon.

The wood shelving has been removed and our ever-awesome Facilities crew has installed metal shelving for the magazines to reside on until they make their permanent move to the North Reading Room. Tech Services staff will begin placing current issues on the shelves in the Periodicals Room this afternoon, followed by back issues. An important note: we are putting the magazines in A to Z title order instead of the categories they’ve been arranged in.

Why A to Z? Three reasons:

Once they’ve made the move to the North Reading Room, our plan is to put them back in the same categories they were in before. But for this transition period of 4 to 6 weeks, they’ll be shelved A to Z by title.

A big thanks to everyone who assisted with this project today.