On Sunday, July 13, the public computers near the front of the New Books room will be temporarily removed in preparation for some construction work.  Monday, July 14, the walls of the old Periodicals room, near the music CDs, will be removed.  After this is complete the old carpet in this small section will be removed and carpet that matches the rest of the New Books room will be laid.  Once this is done the public computers will be put back in the space.  Other than temporarily removing these eight computers, this shouldn’t prevent any of the other regular use of this space.  This work should take about a week.

The majority of the work inside the L 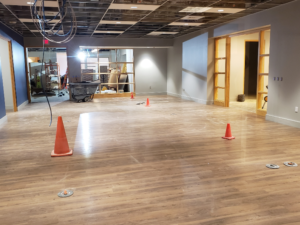 Interior construction has been focused on the Learning Center over the past few weeks, but there still has been work going on in the Plaza.  Most of the work involves the creation of the display window into the Booktique.  They have already done the majority of the work in creating the display window, but next week they will create the final opening into the Booktique and install the woodwork.

After the Learning Center is complete all of the interior work will focus on completing the Plaza.  A big portion of this work will be laying the rest of the tile in this space.  The remaining portion of the Plaza, and this project, should be complete in August.  I know we’ll all be excited to have the work complete and see our renovated space.

There has been a tremendous amount of progress in Claire’s Courtyard over the past few weeks.  The work on the trellis, including the installation of the sun shade, is complete, and the landscaping of the lower area outside of Ruth’s office is almost finished.  However, the most exciting news is that just today they poured the final portion of the concrete for the patio.  Now that this is complete they can focus on a lot of the finishing details, such as installing railings and landscaping. 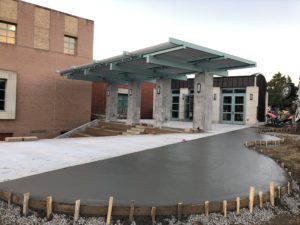 The space should be finished by the end of August.  However, we should have the majority of the work complete by Saturday, July 20 in time for our first Cocktails in the Courtyard event.  We plan to hold this event in the Courtyard, although we won’t completely open the space up until all of the work is complete. We should have a more specific estimated completion date within the next couple of weeks.